In the heart of the Swiss Alps, mountain biking got a digital upgrade.

State-of-the-art-technology enhances the customer experience in a meaningful way. So, guests are not only inspired to spend more time in their saddle but also encouraged to further explore the landscapes of the destination. This fusion of nature, humans and technology creates a unique symbiosis between the real and the digital experience: The next level mountain bike destination.

Only three months after launch, the Bike Kingdom app counts more than 40,000 downloads and is used by over 1’000 daily active users. It serves as the digital compass for mountain bikers while navigating along the over 900km trails through the epic landscapes of the region which stretches from Lenzerheide via Arosa down to Chur.

The use of gamification elements opens up a whole new world as the biking experience transforms into a virtual game.

By connecting the GPS tracking software Strava to the Bike Kingdom app, the analog trails turn into an online playground. With this added digital dimension, guests can track their rides, analyze their performance and compete with friends.

Besides enhancing the guests’ biking experience, another key objective of the app is to connect guests with the destination’s service partners in a meaningful way. With this thought in mind, the Quests were born. Quests are personal missions, which are rewarded with exclusive offers upon successful completion. These missions are sponsored and co-designed by partner companies of Bike Kingdom such as hotels, restaurants, car manufacturers or bike brands and stores. 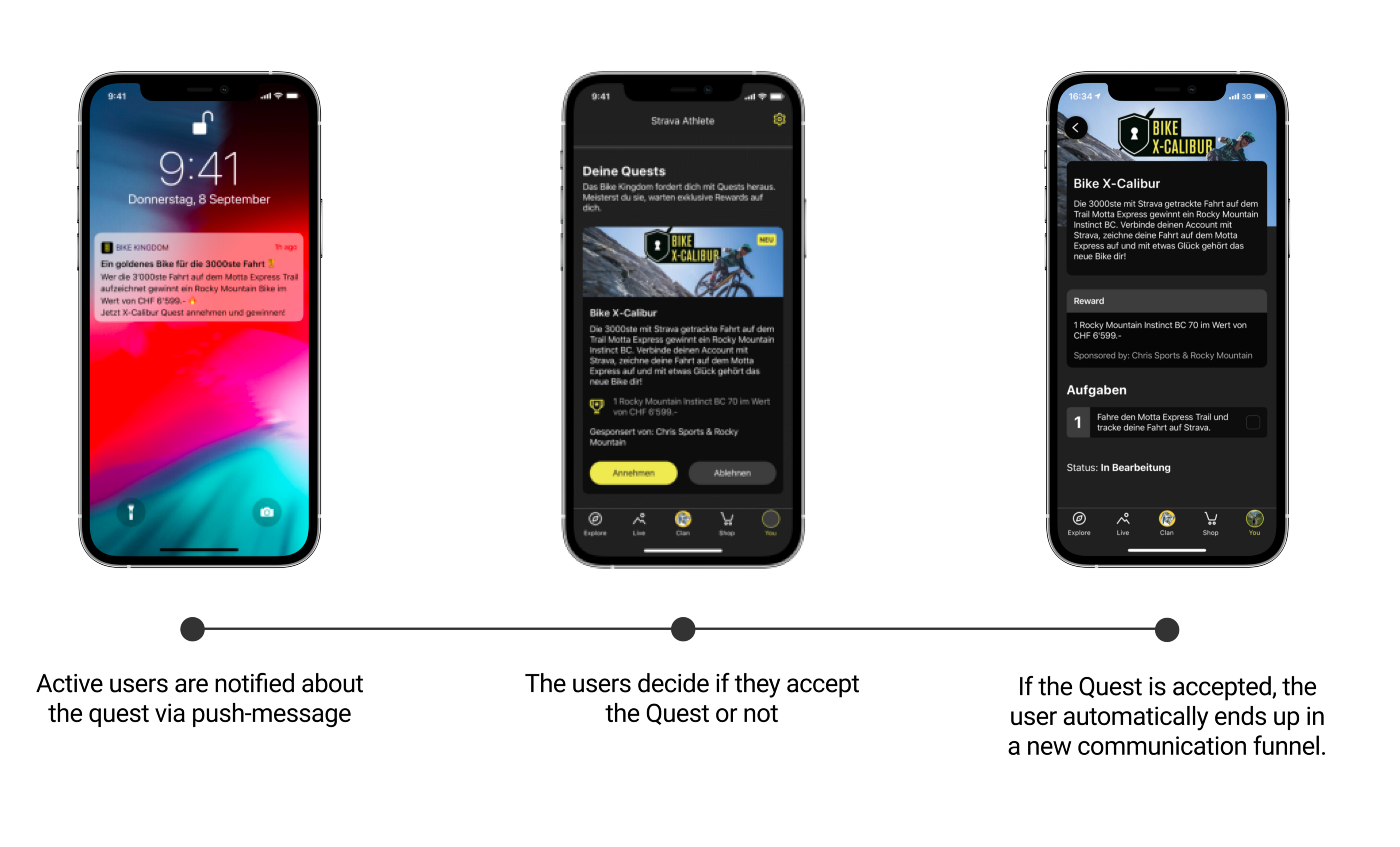 The ultimate highlight of the season? The Quest X-Calibur! This challenge involved riding the 3,000th ride of the Trail “Motta Express” and tracking it with the Bike Kingdom app. The prize: a mountain bike worth over CHF 6’000.-! In order to participate, users had to accept the Quest with a simple click and then ride and track that trail.

In order to communicate with the participating users, the Quest X-Calibur campaign is built on automated communication flows based on real-time data. Depending on their individual app interactions, each user is guided through the customer journey receiving context-based and personalized messages.

Anna has visited the Bike Kingdom several times this summer and tracks her rides via the app. As an active user who is currently in the region, her attention is drawn to the Quest by receiving a push notification. From this message she’s directly linked to the Quest. By accepting it, she automatically ends up in a second communication funnel. In this funnel, Anna receives a reminder to complete the Quest. The following weekend, Anna takes on the challenge and rides the Motta Express trail five times in one day.

After each tracking, she receives a confirmation message, encouraging her to give it another try, as “it has not been the 3,000th ride yet”.

Along with the showcase scenario of Anna, a variety of other cases are considered in the automated communication. For example, bikers who take on the X-Calibur challenge but have not yet connected their profile to Strava, are actively notified to login to the tracking app in order to win the bike. With this push-message, the conversion of Strava connections was increased by 10%.

The focus of the X-Calibur campaign was to offer the guests a playful experience through the existing gamification module. This with the aim to foster the customer loyalty and to strengthen the guests’ relationship with the destination and the brand. With this approach, the Bike Kingdom app evokes emotions as well as the feeling of belonging and recognition.

The effectiveness of the automated communication is proven by our key performance indicators:

And the winner is...
Congratulations Black Hawk!

The rider “Black Hawk” completed the 3,000th ride in the Quest X-Calibur, won the mountain bike and, moreover, impressively demonstrated what biking passion looks like. In fact, in the season of 2020 he has spent 23 days in the Bike Kingdom, tracked 355 trails and covered 49,600 vertical meters.

After receiving his prize, he made a statement that caused astonishment. Just last year he had bought his first second-hand downhill bike, that was supposed to be replaced by a new one in the coming year — which is now not necessary anymore.


The perfect winner of a successful Quest who will definitely be seen again on the biking trails in Lenzerheide. From now on, with a brand-new high-end bike! A happy end for “Black Hawk” and the first season of Bike Kingdom!