Don’t crack under pressure - Data’s got your back.

LAAX, Switzerland. One of Europe’s leading ski resorts boasts breathtaking views, more than 220km of slopes, and is known to be the world’s best freestyle resort.

Today it’s also renowned for digital innovation and using technology to craft meaningful experiences for guests. The core component is the INSIDE LAAX app with more than 200,000 users. With its popular gamification system, useful features and exclusively tailored offers, it focuses on the meaningful digital relationship with guests.

Throughout the 2019/2020 winter season, this relationship was unexpectedly and unprecedentedly put to the test due to: a shutdown of the ticketing system during the Christmas holidays, a simultaneous technical failure at an important chairlift and, 11 weeks later, the early closure of the ski area due to the coronavirus measures.

inside labs develops digital experience platforms for tourism operators and regions. Digital experience platforms are data machines that personalize guest communication and offers, promote loyalty through gamification and therefore strengthen sales. The inside labs OMNI platform on which the INSIDE LAAX app is based was developed in close cooperation with the Weisse Arena Group in LAAX.

In this case study, we explain how we were able to compensate the affected guests thanks to app data, why open and honest guest communication is essential during crisis situations and to what extent a data-based ecosystem is not only suitable for playful experiences in tourism destinations, but also as a versatile necessity in times of high uncertainty.


At the end of 2019, just in time for the seasonal peak between Christmas and New Year, we were faced with the failure of the booking server of our third-party ticket system provider. This affected the entire operation: guests who had been looking forward to their well-deserved skiing holiday could not pass the gates with the tickets they purchased online. This led to long waiting times at the lifts and cash desks.

Furthermore, the INSIDE LAAX app was not fully accessible, since functions such as collecting badges and points as well as guest statistics were offline — this was especially irritating to our loyal app users and season ticket holders. Reader reporters quickly spread the situation in the media, while others expressed their displeasure on social media. So, even people unaffected by the circumstances became aware of the situation. The technical problems lasted for more than 72 hours, followed by a step-by-step return to normal operation.

The shutdown team, an ad hoc setup of members of LAAX Marketing and the management of the Weisse Arena Group, as well as inside labs employees, took the first important decision when no one could yet predict how long the technical malfunction would last: To communicate all information through the app exclusively. With the help of the app every affected user can be identified and reached — from guests, to those staying at home as well as employees.

We handled the first «crisis day» with a lot of friendliness and the tireless efforts of the staff and software developers handing out working tickets to disgruntled guests at the lifts. It soon became clear: we would need orchestrated crisis communication.

As a first measure, we decided on an empathic gesture with an unconventional wording: We invited all app users who had linked their ticket to the app and were on the mountain during this time, a total of 8,603 people, to a shutdown drink with the LAAX CEO and president Reto Gurtner. The invitation came from Reto personally with the words «Shit happens, let’s drink to that», because at this time it was too late for excuses of any kind — the shutdown had considerable consequences for the guest who was otherwise used to high standards when it comes to convenience. The wording from the app was adopted word-for-word by the media, along with our announcement that those affected would be compensated soon.

Usually, in the INSIDE LAAX app we show content that is adapted to user behavior. Therefore, each app feed looks different. During crisis communication, we opted for a live ticker that made the same amount of information available to users, journalists and employees. In the live ticker, we documented the gradual return to normal operation in our usual relaxed tonality, offered a look behind the scenes and comprehensively explained the technological aspects at fault.

At the same time, we analyzed the effective impact on guests. The app and related data was our reliable basis for data analysis: Who had booked online and had to wait in long queues before an alternative was offered by the employees at the turnstile? Who could be told the night before that the ticket purchased might not work and that they would get a new one without queuing? Who else on the mountain was affected and what type of ticket had the person obtained?

This way, we could see that over 70 percent of guests had tickets that worked without an issue. 1800 guests were actually affected by the worst case «online ticket did not work», whilst the emotional damage suffered by 7,500 season ticket holders also had to be taken into account since they were affected by the «no app statistics» scenario. Thanks to the app data, every guest who had suffered damage was identified and received an individual message via push and email, depending on their individual circumstances — within just two days after the technical fault. 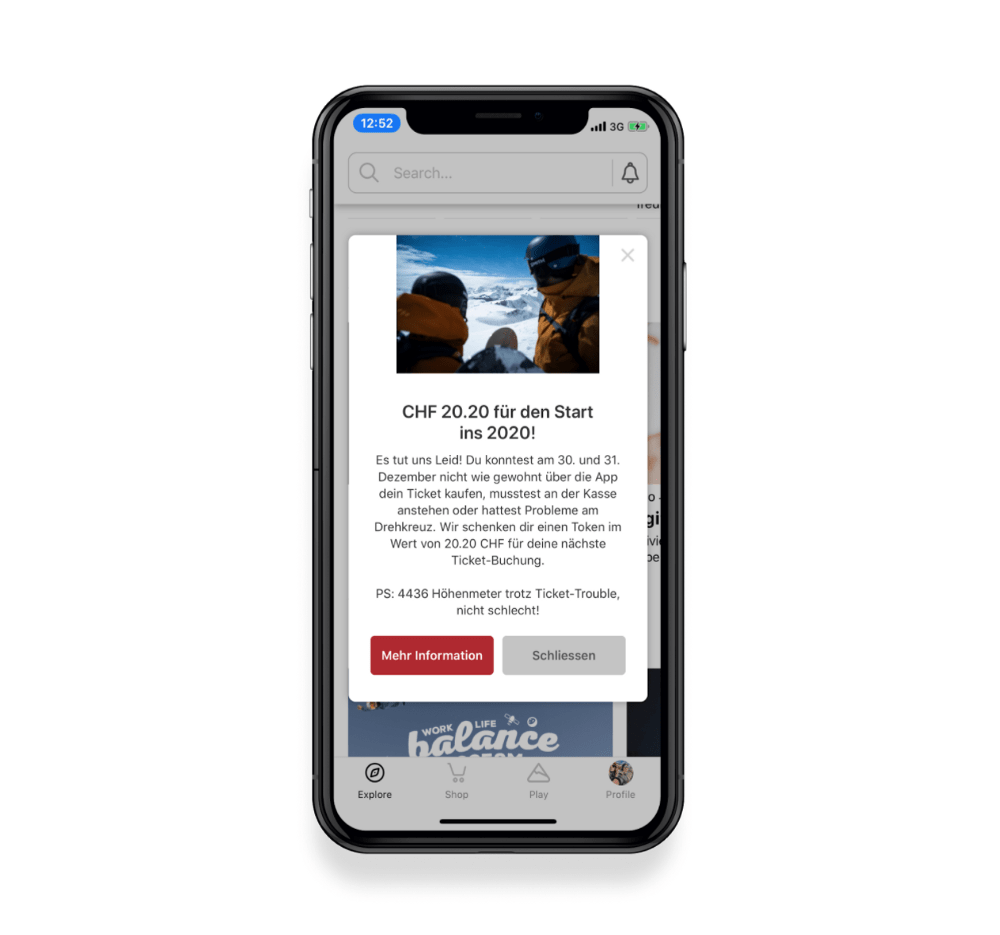 Guests in a dead end


In ski resorts it is not unusual that a lift temporarily fails due to technical problems. However, it felt like a stroke of bad luck that the Lavadinas chairlift stood still for over two hours — exactly on a day with over 19,000 winter sports enthusiasts on the mountain — and that hundreds of guests couldn’t get out of the valley station at the far edge of the area.

Again, in this case, a look into the app data helped us: After analyzing the gate scans, we were able to track down which 304 key card owners passed through the affected gates during and shortly after the relevant period of time. Within a few days, the victims received a personalized message including a token (voucher) to redeem in the app.

The Lavadinas “Porsche” Liftstation — a dead end during a technical fault.

Over the INSIDE LAAX app, we were able to respond to the particular guest relationships during the shutdown and the Lavadinas outage, depending on how much the people were affected by the technical problems.

We showed appreciation towards our most loyal and critical customers — the season pass holders — and at the same time we compensated the holiday guests for the actual circumstances that had arisen. Two factors were crucial for the success:


ONE: Identify and Refund

We used the digital ecosystem to identify the right people and compensated the circumstances with digital amends that could be redeemed immediately or at a later time.

We focused on the human factor, both in an agile team setup and in external communication. Communicating with the target group at eye-level proved to be a challenge, especially in crisis communication: Continuing to appear as confident sender, in the usual informal LAAX tonality and with unconventional wording at times, but without sounding arrogant and without ignoring the great need for empathy that the affected have in a crisis situation.


Just when we were excited for a fulminant season end, the corona virus had other drastic plans: first the closure of the mountain railways, then the shutdown of the entire destination, including gastronomy. When the core business stands still, what role does the digital ecosystem of the INSIDE LAAX app still play?

During difficult times, it can be the first touch point to satisfy the needs of guests and locals: up-to-date information, refunds, services and even something for the small or big appetite!

The innovators in gastronomy and marketing in LAAX reacted quickly and made a virtue out of necessity. Together with the development team of inside labs, a food delivery service was implemented within a short period of time. Dishes from restaurants in the destination, as well as everyday groceries could be ordered directly via the app. This was especially convenient for those that want to isolate themselves in the mountains to work without disturbance and the elderly. 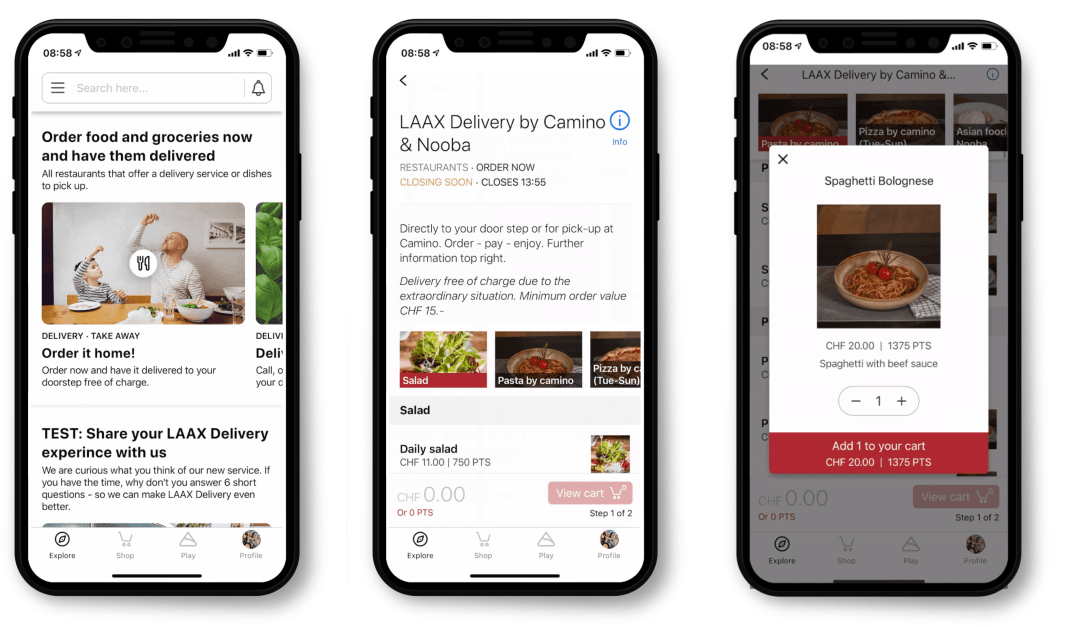 In the initial uncertain period days, we prepared content for every possible closure scenario in order to publish it as a 'LAAX Guide to Corona' via the app. In the prevalent situation, additional content such as INSIDE points quizzes, secret recipes or a Romansh language course created additional incentives to open the app, even if you were not in Laax.

A data-based ecosystem for the changing needs of human communication


In these three scenarios, the INSIDE LAAX app based on the OMNI Platform served us both as a tool and a medium: The presented communication solutions were only possible thanks to the interaction of strong technology and a forward-thinking team.

The situations required that the communication team aimed their entire focus on the care of guests for a few days, because specifically this is the core competence of tourism. Only humans have a sense for empathic communication at eye level. If you equip them with the digital tools of a data-based ecosystem, words turn into actions — which ultimately strengthens the relationship with your guests.

The ability to react to ever-changing external influences and to continually use technology for engaging and meaningful interactions with guests, shows how essential a strong digital foundation for tourism destinations will be in the future.